How to Make Your Beard Grow in Bald Spots? I’m happy for you! I’m happy you’ve finally chosen to be a real man – chosen to leave your beard grow and blossom. Albeit, I’m also sad. I’m sad you are almost getting frustrated with the art of grooming a beard. I’m sad you are having a beard whose appearance is more like a baseball team – nine on each side. The bald spots, your patchy beard is giving me mixed emotions, it’s quite depressing, you know.

But, I’m also happy for you! I’m happy you’re getting to read this article!

Just like an always cultivated farmland, your chin would also lose its nutrients, and all, which encourages the growth of beards. Hence, the principal cause for the bald spots appearing on your chin, and neck area. However, fear not! Herein is the solution you need.

In this article, you are going to learn several proven ways to fix Alopecia Barbae, i.e. how to make beard grow in bald spots on your chin!

Firstly, What Exactly is the Alopecia Barbae?

So as not to confuse stuff, it is imperative to begin from the scratch; what exactly is the growth of bald spots on your beard, scientifically known as the Alopecia Barbae?

However, the Alopecia Barbae affects the beard specifically – hence, accounts for the immune system attacking the hair follicles, thereby causing hair loss, which in turn appears as bald spots. The hair loss appears quite suddenly, forming circular patches in the beard.

The above-described beard condition is your case, right? So, you’re on the right track, proceed!

Causes of a Patchy Beard

Asides the general cause which was mentioned when explaining what exactly the bald spot appearing on the beard is, there are still a few other causes of the health condition – by now, I’m sure you know it is a health condition.

It is imperative to know the cause of a problem before applying the required and/or necessary solution, I am sure you are aware of this too. Hence, the reason for this section too in this article.

As mentioned earlier, many of the causes, in fact, if not all, can be explained scientifically.

Asides the immune system’s fault, the most important cause of the growth of bald spots on your beard is the significant reduction in the flow of blood to the chin and upper lip part of the body. This thereby implies that it takes a longer time before essential nutrients reach these areas, thus the resulting health condition.

Another cause of the Alopecia Barbae is the low level of DHT and Testosterone in the body system. And remember, the essentials for the blossoming of the beards are the above-mentioned hormones.

Also, asides the low level of the hormones, bald spots in your beard can also be as a result of the inactivity or dormancy of the androgen receptors in your body system. The truth is, even with a high level of blood supply in your chin and upper lip areas of your body, if your androgen receptors aren’t functional or are slow in receptibility, then your beard would definitely have bald spots.

Finally, asides the scientific explanations, bald spots in the beard is also caused by psychological and physical stress. Genetics as well plays a significant role.

How To Make Beard Grow In Bald Spots

Without mincing words, this is the best approach to making beard grow on your bald spots again.

There are loads of vitamins out there in the market whose function is basically to aid the growth of beard. however, if you look closely, you’d realize every of these vitamin supplements contains some form of Biotin.

Now, what is Biotin?

Biotin, popularly known as Vitamin B Complex family member, is an essential condiment for the growth of beard. according to rigorous researches, it was discovered, that the lack or inadequate supply of Biotin in the body, causes health conditions like thinning, loss of hair, and ultimately, the establishment of bald spots on the beard.

However, even with all of the proofs stated above, it is still not convincing to draw a conclusion that the abundance of Biotin is the absolute cure for bald spots.

To this, I think it is safer to say that your patchy beard is more aligned to your irregular diet than the lack of biotin. However, I am not affirming that this applies to everybody.

Back to the subject matter, vitamins help a lot in making beard grow in bald spots. And as you would agree, there are a whole lot of means of sourcing the right kinds of vitamins. Firstly, is living a healthy kind of lifestyle, which of course includes following the right diet, taking a whole lot of proteins, Vitamins A, E, and D too would cause a lot of magic.

Fatty Acids is also a vitamin that shouldn’t be sidelined, as it helps the beard from not getting dry and husky. Avoid junks too! 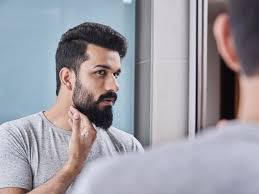 For me, Minoxidil is the best solution for patchy beards. Well, let’s say the best known yet.

The Minoxidil is a popular (I’m not sure if you have heard of it before, anyway) drug provided for treating the loss of hair on the scalps, and also without a prescription! However, despite this, many medical lords have tested and announced that this drug has been proven to be trusted – simply, they described it as one which is active in making hair grow by activating the hormone receptors that appear to be weak or dormant.

Basically, Minoxidil works by opening the potassium channels of the pores, which in turn causes the increase in stimuli of the beard follicle cells. This as well causes nutrients to rush in the direction of such part of the body, hence an improved circulation of both nutrients, hormones, and blood.

A plus is the inclusion of Rogaine as one of its constituents. The Rogaine is touted to be the number one hair re-growth formula in the market at present.

Asides this again, the Minoxidil helps in boosting the size of the shaft of the hair follicles. By doing this, the diameter of the hair root gets increased, whilst also encouraging the shift of the follicles from a resting position to an active growth phase.

Finally, Minoxidil works on any kind of hair. Irrespective of the area the hair is found, although the drug is said to be a scalp regrowth formula, it tends to help promote the growth of such hair.

Looking for how to make beard grow in bald spots? Minoxidil is another great option to consider. 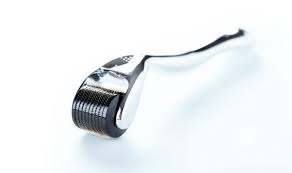 A beard roller, or better still, a Derma Roller, is a simple beard care product that contains hundreds of microneedles, which you roll over your skin or beard as the case may be.

Now, don’t get wild or irritated yet, this is the trick;

The Derma Roller, when rolled over the skin/beard, causes lots of prickles, pains, cuts, etc. This thereafter causes the body to produce more blood, which flows up to the area of the cut, or as the case may be. I’m sure by now, you are familiar with the advantages tied around the abundance of blood flow in the chin area.

However, it is imperative to note that the Derma Roller doesn’t cause any scar.

Basically, the use of the Derma Roller provides the chin area with a whole lot of blood flow, prevents, or rather reduces the wrinkles of the chin area, lessen the scar tissue of the skin, stimulates the hair follicles, and lastly promotes the production of collagen and elastin. All of these advantages of the beard roller otherwise called the derma roller are aimed at making beard grow in bald spots.

However, there’s a high need for carefulness during the usage of the derma roller. The handwritings are written on the wall; the tool is fixed with needles… Do you get my point?

Watch how best to use a derma roller below; Coffee has been proven to help greatly in the increase of the Testosterone level of the body.

Coffee as well may help in the promotion of the secretion of the thyroid hormone. The Thyroid Hormone is a hormone which helps in the regulation of the growth factors of the human body – which includes but not limited to the nail, hair, and the growth of beards too!

As well, Coffee helps in slowing down the decomposition of the cyclic adenosine monophosphate. cAMP is a secondary messenger molecule which acts between hormones and the cells.

However, the only disadvantage that comes with the usage of coffee to make beard grow in bald spots is that it as well helps in increasing the stress hormone cortisol of the body.

The application of this drug, however, causes serious allergic reactions, such as itchiness, swelling, redness, etc.

The funny thing about these reactions is that they are the ones that cause the effectiveness of the drug!

The swelling, itchiness, etc. that is noticed upon the usage of this medication actually tricks your immune system into sending an abundance of white blood cells to that area of reaction in other to combat the supposed infection in such an area which is causing such effect. Hence, the flow of nutrients and other necessary materials to such area, which in turn causes the growth of beards in the areas where they aren’t earlier.

This would be the final tip on how to make beard grow in bald spots.

Rest a lot. Sleep. Do not overstress yourself. Like I mentioned earlier in this article, physical, and psychological stresses can as well cause the growth of bald spots in your beard. hence, the need to catch a whole lot of rest. Avoid sleeping for less than 5 hours daily – you definitely can’t get a blossoming beard that way; your chances are very slim.

Conclusion on how to make beard grow in bald spots

So, that would be all on how to make beard grow in bald spots.

There isn’t really much to say again asides all that has been discussed up there. However, I would love to leave you with just a piece of advice; DO NOT FIX YOUR PATCHY BEARD, INSTEAD, FILL IT!

To fill, please follow any of the tips discussed in this article, and the case of bald spots in your beard would only be a tale to be told in the future.